Latest articles
Home Book News Reading in a book: This Civilisation is Finished: Conversations on the end of Empire – and what lies beyond. 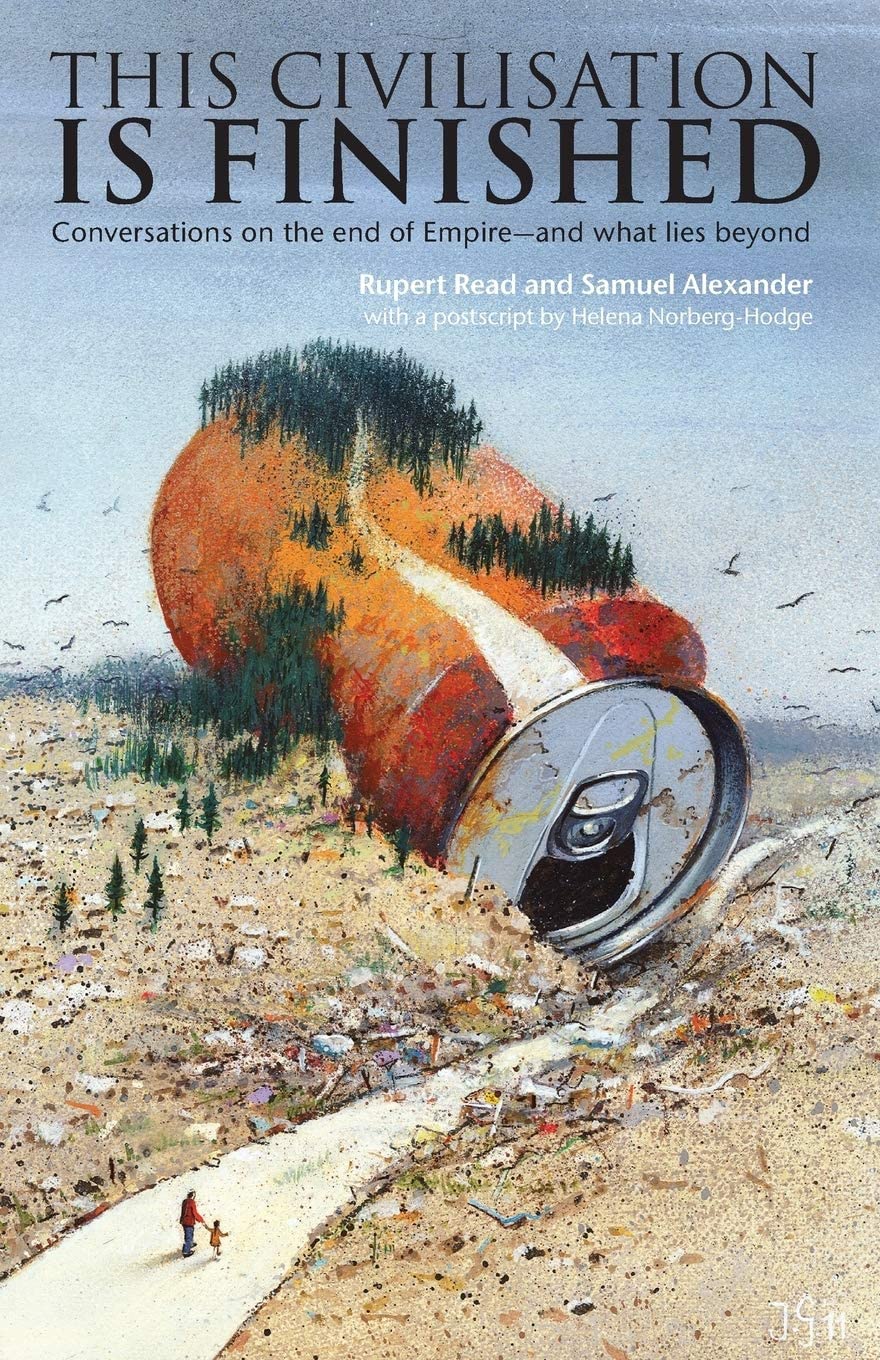 Reading in a book: This Civilisation is Finished: Conversations on the end of Empire – and what lies beyond.

on: June 30, 2020In: Book News, Self-development and its importanceNo Comments
Print Email

Industrial civilisation has no future. It requires limitless economic growth on a finite planet. The reckless combustion of fossil fuels means that Earth’s climate is changing disastrously, in ways that cannot be resolved by piecemeal reform or technological innovation. Sooner rather than later this global capitalist system will come to an end, destroyed by its own ecological contradictions. Unless humanity does something beautiful and unprecedented, the ending of industrial civilisation will take the form of collapse, which could mean a harrowing die-off of billions of people.

This book is for those ready to accept the full gravity of the human predicament – and to consider what in the world is to be done. How can humanity mindfully navigate the inevitable descent ahead? Two critical thinkers here remove the rose-tinted glasses of much social and environmental commentary. With unremitting realism and yet defiant positivity, they engage each other in uncomfortable conversations about the end of Empire and what lies beyond.

‘A brave and necessary conversation, which digs deep into ideas which will make many people – including many greens – uncomfortable. This book should help everyone to question their own assumptions.’ – Paul Kingsnorth, co-founder of The Dark Mountain Project

‘Decades of pretence are coming to a close. Rapid changes in our climate are waking us up to the reality that we and the Earth are one system. The wasted decades mean we are woefully unprepared for the consequences of our actions. Read and Alexander show that our civilisation of separation is finished. They invite us to start having difficult but creative conversations about the shape of what’s to come and how we might get there. A helpful balm for climate anxiety – this book leaves you feeling that something could be salvaged and something better might even be born.’ – Jem Bendell, author of “Deep Adaptation”

‘Far from urging dejection or despair, these authors look at the greatest challenges facing humanity with unusual honesty – and yet they find meaning, purpose, and perhaps even hope in unexpected places.’ – Richard Heinberg, author of The End of Growth

‘Bring your fear, your despair and your hope to this book – it will nurture them all with sharp and nuanced insight.’ – Kate Raworth, author of Doughnut Economics

Rupert Read works closely with environmental scientists, in ecological philosophy, at the University of East Anglia. His publications include a number of academic and popular books, including Philosophy for Life: Applying Philosophy in Politics and Culture (2007). He blogs on environmental reframing at Green Words website and has two chapters in the new Green House think-tank book: Facing up to Climate Reality (2019). Rupert has written for the Guardian, The Independent, The Ecologist and many other popular newspapers, magazines and websites. He was a Green Party councillor in Norwich from 2004-2011. In June 2018, he triggered a BBC policy shift by publicly refusing to debate a climate change denier, which ended the presenting of climate change deniers’ views as a counterbalance to scientific standpoints. His recent talk titled ‘Shed A Light: Rupert Read – This civilisation is finished: so what is to be done?’, presented at Churchill College Cambridge, is gaining viral impact on YouTube, having been viewed over 70,000 times.

Dr Samuel Alexander is a Research Fellow with the Melbourne Sustainable Society Institute and a lecturer with the Office for Environmental Programs. He teaches a course called ‘Consumerism and the Growth Economy: Critical Interdisciplinary Perspectives’ as part of the Master of Environment. He is also co-director of the Simplicity Institute. His interdisciplinary research focuses on post-growth and degrowth economics, energy, voluntary simplicity, ‘grassroots’ theories of transition, and the relationship between culture and political economy. Alexander’s books include Degrowth in the Suburbs (2019, co-authored with Brendan Gleeson), Carbon Civilisation and the Energy Descent Future (2018, co-authored with Joshua Floyd), Art Against Empire: Toward an Aesthetics of Degrowth (2017), Just Enough is Plenty: Thoreau’s Alternative Economics (2016), Deface the Currency: The Lost Dialogues of Diogenes (2016), Prosperous Descent: Crisis as Opportunity in an Age of Limits (2015), Sufficiency Economy: Enough, for Everyone, Forever (2015), and Entropia: Life Beyond Industrial Civilisation (2013). He is also editor of Voluntary Simplicity: The Poetic Alternative to Consumer Culture (2009) and co-editor of Simple Living in History: Pioneers of the Deep Future (2014). Most of his writings are available at samuelalexander.info

According to Amazon description.

If you are interested in buying this book please try its link bellow:

. The Subtle Art of Not Giving a F*ck: A Counterintuitive Approach to Living a Good Life – Mark Manson