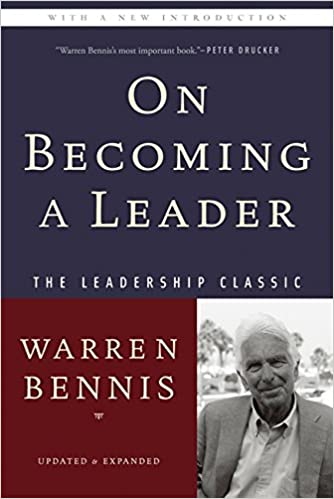 A book to read: On Becoming a Leader 4th Edition – Warren G. Bennis

A timeless classic from a pioneer in the field of leadership studies-the only book you need to read on becoming an effective leader.

Warren Bennis (1925-2014) was a pioneer in leadership studies, a scholar who advised presidents and business executives alike on how to become successful leaders. On Becoming a Leader is his seminal work, exemplifying Bennis’s core belief that leaders are not born-they are made. In a world increasingly defined by turbulence and uncertainty, the call to leadership is more urgent than ever. Providing essential and timeless insights for generations of readers, On Becoming a Leader delves into the qualities that define leadership, the people who exemplify it, and the strategies that anyone can apply to achieve it.

Dubbed the “dean of leadership gurus” by Forbes magazine, Bennis remains the final word in modern leadership. This seminal work is a must-read for anyone who aspires to leadership excellence.

” On Becoming a Leader is the indispensable handbook for anyone who had become a leader. Warren Bennis maps the terrain of leadership with a rare sense of wisdom and authority.”
― Daniel Goleman

Warren Bennis (1925 – 2014) was an American scholar, organizational consultant, and author, who was widely regarded as the pioneer of the contemporary field of leadership. He served as Distinguished Professor of Business Administration at the University of Southern California, as chairman of the Advisory Board of the Center for Public Leadership at Harvard University’s John F. Kennedy School of Government, and as a consultant to multinational companies and governments throughout the world.

In 2007, BusinessWeek called him one of ten business school professors who have had the greatest influence on business thinking. He has received twenty honorary degrees and has served on numerous boards of advisors. He authored dozens of articles and over thirty books on leadership, including On Becoming a Leader and Organizing Genius.