Latest articles
Home Book News A book to read : Give and Take: Why Helping Others Drives Our Success-ADAM GRANT. 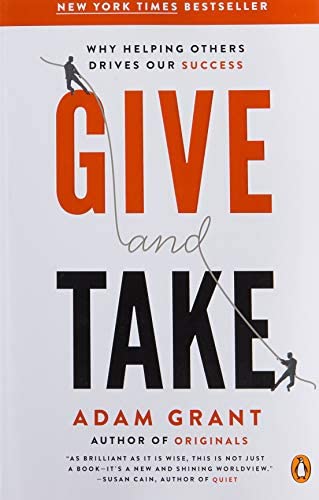 A book to read : Give and Take: Why Helping Others Drives Our Success-ADAM GRANT.

For generations, we have focused on the individual drivers of success: passion, hard work, talent, and luck. But in today’s dramatically reconfigured world, success is increasingly dependent on how we interact with others. In  Give and Take, Adam Grant, an award-winning researcher and Wharton’s highest-rated professor, examines the surprising forces that shape why some people rise to the top of the success ladder while others sink to the bottom. Praised by social scientists, business theorists, and corporate leaders,  Give and Take opens up an approach to work, interactions, and productivity that is nothing short of

Adam Grant is an organizational psychologist at Wharton, where he has been the top-rated professor for seven straight years. He is an expert in how we can find motivation and meaning, and lead more generous and creative lives. He is the #1  New York Times bestselling author of four books that have sold over 2 million copies and been translated into 35 languages:  Give and Take,  Originals,  Option B, and  Power Moves. His books have been recognized as among the year’s best by Amazon, the  Financial Times,  Harvard Business Review, and the  Wall Street Journaland been praised by J.J. Abrams, Richard Branson, Bill and Melinda Gates, Malcolm Gladwell, and Malala Yousafzai.

Adam’s TED talks have been viewed more than 20 million times. He hosts the chart-topping TED podcast WorkLife. His speaking and consulting clients include Google, the NBA, Bridgewater, and the Gates Foundation. He has been recognized as one of the world’s 10 most influential management thinkers, Fortune’s 40 under 40, Oprah’s Super Soul 100, and a World Economic Forum Young Global Leader, and received distinguished scientific achievement awards from the American Psychological Association and the National Science Foundation. Adam writes for the  New York Times on work and psychology and serves on the Department of Defense Innovation Board. He received his B.A. from Harvard and his Ph.D. from the University of Michigan, and he is a former Junior Olympic springboard diver. He lives in Philadelphia with his wife Allison, their two daughters,  and their son     .

If interested in learning more,  try to buy the book on amazon platform , throuth its link below :