on: July 27, 2018In: Self-development and its importance, Share your experience and send us your lessonsNo Comments
Print Email 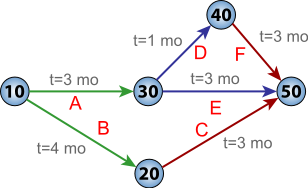 The critical path method (CPM), or critical path analysis (CPA), is an algorithm for scheduling a set of project activities. It is commonly used in conjunction with the program evaluation and review technique (PERT).

The critical path method (CPM) is a project modeling technique developed in the late 1950s by Morgan R. Walker of DuPont and James E. Kelley Jr. of Remington Rand. Kelley and Walker related their memories of the development of CPM in 1989. Kelley attributed the term “critical path” to the developers of the Program Evaluation and Review Technique which was developed at about the same time by Booz Allen Hamilton and the U.S. Navy. The precursors of what came to be known as Critical Path were developed and put into practice by DuPont between 1940 and 1943 and contributed to the success of the Manhattan Project.

Critical Path Analysis is commonly used with all forms of projects, including construction, aerospace and defense, software development, research projects, product development, engineering, and plant maintenance, among others. Any project with interdependent activities can apply this method of mathematical analysis. The first time CPM was used for major skyscraper development was in 1966 while constructing the former World Trade Center Twin Towers in New York City. Although the original CPM program and approach is no longer used, the term is generally applied to any approach used to analyze a project network logic diagram.

The essential technique for using CPM: is to construct a model of the project that includes the following:

A list of all activities required to complete the project (typically categorized within a work breakdown structure),
The time (duration) that each activity will take to complete,The dependencies between the activities and,
Logical end points such as milestones or deliverable items.
Using these values, CPM calculates the longest path of planned activities to logical end points or to the end of the project, and the earliest and latest that each activity can start and finish without making the project longer. This process determines which activities are “critical” (i.e., on the longest path) and which have “total float” (i.e., can be delayed without making the project longer).

In project management, a critical path is the sequence of project network activities which add up to the longest overall duration, regardless if that longest duration has float or not. This determines the shortest time possible to complete the project. There can be ‘total float’ (unused time) within the critical path.

For example, if a project is testing a solar panel and task ‘B‘ requires ‘sunrise’, there could be a scheduling constraint on the testing activity so that it would not start until the scheduled time for sunrise. This might insert dead time (total float) into the schedule on the activities on that path prior to the sunrise due to needing to wait for this event. This path, with the constraint-generated total float would actually make the path longer, with total float being part of the shortest possible duration for the overall project. In other words, individual tasks on the critical path prior to the constraint might be able to be delayed without elongating the critical path; this is the ‘total float‘ of that task. However, the time added to the project duration by the constraint is actually critical path drag, the amount by which the project’s duration is extended by each critical path activity and constraint.

A project can have several, parallel, near critical paths; and some or all of the tasks could have ‘free float’ and/or ‘total float’. An additional parallel path through the network with the total durations shorter than the critical path is called a sub-critical or non-critical path. Activities on sub-critical paths have no drag, as they are not extending the project’s duration. 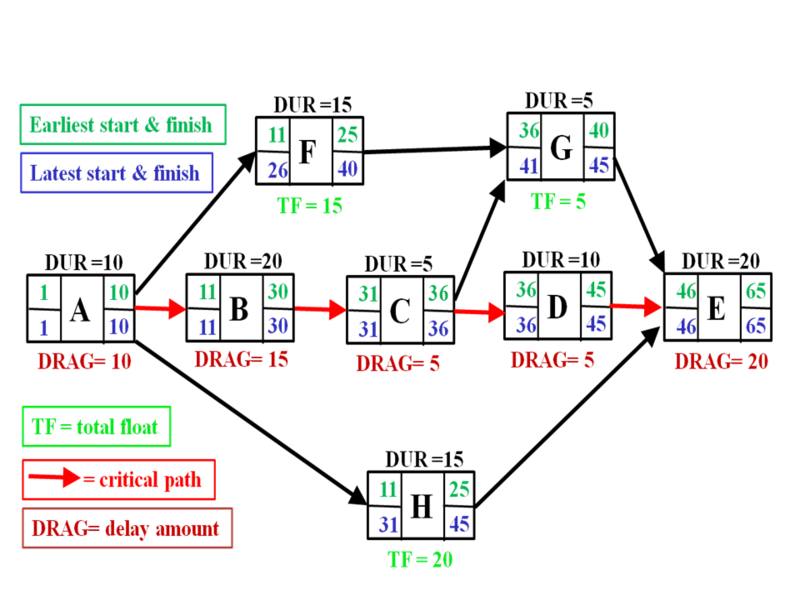 Critical path drag analysis has also been used to optimize schedules in processes outside of strict project-oriented contexts, such as to increase manufacturing throughput by using the technique and metrics to identify and alleviate delaying factors and thus reduce assembly lead time.

Crash duration is a term referring to the shortest possible time for which an activity can be scheduled. It can be achieved by shifting more resources towards the completion of that activity, resulting in decreased time spent and often a reduced quality of work, as the premium is set on speed. Crash duration is typically modeled as a linear relationship between cost and activity duration; however, in many cases a convex function or a step function is more applicable.

Originally, the critical path method considered only logical dependencies between terminal elements. Since then, it has been expanded to allow for the inclusion of resources related to each activity, through processes called activity-based resource assignments and resource leveling. A resource-leveled schedule may include delays due to resource bottlenecks (i.e., unavailability of a resource at the required time), and may cause a previously shorter path to become the longest or most “resource critical” path. A related concept is called the critical chain, which attempts to protect activity and project durations from unforeseen delays due to resource constraints.

Since project schedules change on a regular basis, CPM allows continuous monitoring of the schedule, which allows the project manager to track the critical activities, and alerts the project manager to the possibility that non-critical activities may be delayed beyond their total float, thus creating a new critical path and delaying project completion. In addition, the method can easily incorporate the concepts of stochastic predictions, using the program evaluation and review technique (PERT) and event chain methodology.

Currently, there are several software solutions available in industry that use the CPM method of scheduling; as MSPROJECT . The method currently used by most project management software is based on a manual calculation approach developed by Fondahl of Stanford University.

A schedule generated using the critical path techniques often is not realized precisely, as estimations are used to calculate times: if one mistake is made, the results of the analysis may change. This could cause an upset in the implementation of a project if the estimates are blindly believed, and if changes are not addressed promptly. However, the structure of critical path analysis is such that the variance from the original schedule caused by any change can be measured, and its impact either ameliorated or adjusted for. Indeed, an important element of project postmortem analysis is the as built critical path (ABCP), which analyzes the specific causes and impacts of changes between the planned schedule and eventual schedule as actually implemented.